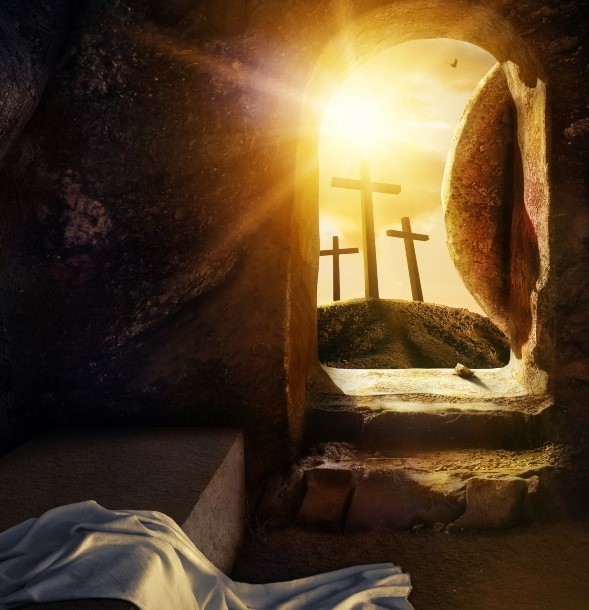 Jesus was dead. Dead people don’t pose a problem, and the soldiers who were posted near the tomb were there to make sure nothing weird happened. As far as everyone was concerned, Jesus’ closest followers included, He was…dead. The people against Him were convinced they had finally accomplished their goal of getting rid of this madman, and they didn’t have to worry about Him anymore. He was…dead.

This was why everything was so calm this Sunday morning. Some women were on their way to the tomb to prepare Jesus’ body for its final rest. As they approached the tomb, they talked about who might be able to move the stone from the tomb’s entrance. The last thing they expected was to learn that Jesus was alive. After all, common sense says that dead people stay dead.

But wait! Again, just like on Friday, when Jesus was on the cross, there was an earthquake! The calmness of the morning was replaced by chaos… The earthquake moved the stone away from the entrance to the tomb…and scared the soldiers out of their minds… The women expected to see the linen-wrapped body of Jesus in the now-open tomb… Instead they saw an angel, who told them, “He is not here. He is alive.” Common sense says that once-dead, now-alive-again people don’t stay in graves.

When the angel declared Jesus had risen, everything changed, forever.

Everything! A “bridge” was built between God and man. Sins past, present, and future were declared forgiven. The enemy was vanquished. Death was defeated. Eternal life was established. Most importantly, everyone could now find hope.

This weekend, believers all over the world will celebrate the reality that Jesus rose from the dead. It’s vitally important for us to know the work of God didn’t stop on the cross or in Jesus’ walking out of that tomb… God is still working through you and me to accomplish some remarkable things for the sake of His Kingdom expansion. Because Jesus rose from the dead, we are people of hope. We take this life-changing hope into our hopeless world filled with hopeless people and do everything we can to spread the hope that can only be found in Jesus.

Think about these things over the next couple of days.